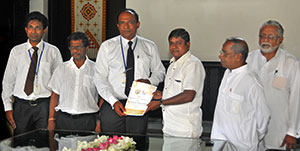 Under the agreement, the company will be providing consistent, uninterrupted high-speed internet services to the temple premises, as well as an IPTV (internet protocol television) connection via SLT PEO TV. These services will be provided free of charge for the period of the agreement and will facilitate the media centre of the temple to undertake the broadcasting and sharing of cultural and religious information pertaining to the temple with the public such as: broadcasting of the annual Kandy perehera online, fast and easy uploading of cultural and religious documentaries / photographs, religious festivals etc.

SLT has consistently come forward to support the Sri Dalada Maligawa for the annual Kandy perehera held during August each year and has provided ICT services for the temple premises comprising of leased line connections, voice and fax connections, high speed broadband services as well as PEO TV facility.

The company prides itself on being the National ICT Solutions Provider, which gives due prominence and respect to the culture and traditions of the country. Moreover, SLT takes a strong stance in actively empowering organizations, institutions and bodies to develop the culture and arts of the country in every way possible, supporting and enabling these activities through an efficient and reliable ICT platform.

This is only the first stage of the Information Technology & Communication project undertaken by the company for the Sri Dalada Maligawa and more ICT related services will be provided to the temple by SLT in the future. This project was actively supported by the staff of SLT Regional Office, Kandy.