Sri Lanka Telecom (SLT), the National ICT Solutions Provider is proud to announce that it has been given the opportunity to build, operate and manage South Asia’s first state-of-the-art Submarine Cable Depot in Magampura Mahinda Rajapaksa Port (MMRP) at Hambantota. As a token of the company’s appreciation and gratitude to His Excellency Mahinda Rajapaksa the President of the Democratic Socialist Republic of Sri Lanka, for his guidance and support towards achieving this significant milestone for Sri Lanka, the company presented him with an appreciation plaque at the Carlton House at Tangalle recently. The presentation ceremony was attended by several VIPs including Hon. Ranjith Siyambalapitiya - Minister of Telecommunications and IT, Hon. Dullas Alahapperuma – Minister of Youth Affairs and Skills Development and Hon. Namal Rajapaksa – Member of Parliament. Representing SLT, Mr. Nimal Welgama – Chairman, Mr. Jayantha Dharmadasa – Director, Mr. Shameendra Rajapaksa – Director, Mr. Lalith De Silva - Group Chief Executive Officer as well as senior officials of SLT were also present at the occasion. 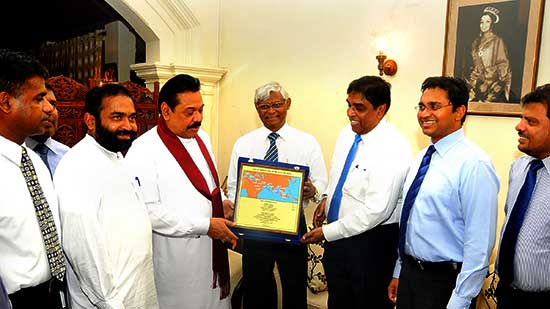 SLT will operate the cable depot in Sri Lanka as a joint venture with a Singapore based cable ship company which is a ship service provider for SEAIOCMA (South East Asia & Indian Ocean Cable Maintenance Agreement). This opportunity was realized as a result of a free port policy declaration and tax concessions offered by the GOSL for MMRP operations at Hambantota.

SEAIOCMA is the international consortium for maintaining the undersea cables. Sri Lanka is an important destination where multiple cable systems are already in operation passing the country. Sri Lanka will be the only Submarine Cable Depot in the South Asian region. Prior to this initiative, Singapore was overlooking the Submarine Cable Depot to facilitate international cable systems. Through this operation in the South Asian region, SLT believes in the possibility of bringing in foreign currency to strengthen the country’s economy in the future.

Magampura Mahinda Rajapaksa Port at Hambantota has been selected to set up a submarine cable depot by the cable consortium with the participation of a number of countries and Sri Lanka will facilitate the cable maintenance ship berth and warehouse facility. SLT has already commenced on the construction work of its Submarine Cable Depot in Hambantota and SEA-ME-WE 5 cable landing station in Matara.

SLT recently announced its partnership of the new SEA-ME-WE 5 undersea submarine cable system expecting to increase by tenfold its international bandwidth capacity for the future requirements of the country as well as the South Asian region. With this global initiative, SLT will further strengthen its position as the only ICT solutions provider in the country having multiple global connectivity options with a gigantic bandwidth capacity that is adequate to cater to the requirements for more than 25 years ahead. This futuristic project is in collaboration with the country's vision for the future to empower the ICT super highway, towards becoming the Wonder of Asia. The SEA-ME-WE 5 project which was commenced with the partnership of 15 global operators has designed a future-ready network that can initially supply more than 24 Terabits per second capability.

Considering the network design, the consortium has identified Sri Lanka to be the location; especially the southern part of Sri Lanka, as a strategic and most suitable location to terminate the cable in between Singapore and Europe (via Saudi Arabia). Although the other Submarine cables land in Colombo (through a branch from the main cables), the landing of SEA-ME-WE 5 cable at this location is strategically the best as it is located in the middle of the system which provides the least latency for signal transmission. While addressing the matters raised by the consortium, SLT selected a location at Browns Hills, Matara to establish the full cable landing station. Landing this international cable at Matara will be a key milestone as well as a landmark for the telecom industry of Sri Lanka as well as the whole country. The SEA-ME-WE 5 submarine cable system will further enhance the uninterrupted connectivity to the world since any redundancies of the existing submarine cable systems (SEA-ME-WE 3 and SEA-ME-WE 4) can be routed through SEA-ME-WE 5 cable system.

The new cable system will enable Sri Lanka to leverage on its strategic marine geographical location in achieving the country’s strategic goals. Moreover this global project will have a positive impact on the overall growth of the country’s economy. On the economic front, a high speed broadband environment will encourage higher GDP, enhanced exports, increased productivity, inward migration and modernizing of other sectors. At all micro and macro-economic levels, it will reduce transaction costs, increase market coverage and competitiveness and create significant opportunities for job creation and income generation. In addition, it will foster economic growth and development through affordable, reliable and seamless global communications.  This initiative will be one of the key enablers in achieving the move towards an inclusive digital economy and a SMART Sri Lanka.

The SEA-ME-WE 5 submarine cable system, spanning approximately 20,000 km, will offer a POP to POP solution from Singapore, all the way to Europe via France and Italy. It connects 17 countries altogether, serving as the new platform for future business ICTs. The SEA-ME-WE 5 cable system which is scheduled to commence operations by early 2016 is designed to provide upgradeable transmission facilities by adopting the latest state-of-the-art 100 Gbps WDM coherent technology. When fully loaded, the SEA-ME-WE 5 cable system would be able to carry 24,000 Giga bits per second (24 Tera bits per second); the equivalent of transmitting around 4800 high-definition movies every second.