Making an announcement with regards to the recent change in leadership at SLT, Mr. P.G. Kumarasinghe Sirisena, the Chairman of SLT stated, “Sri Lanka Telecom is the premier ICT solutions provider to the nation and plays a pivotal role in spearheading the digital revolution of our country. As a consequence of the Company’s corporate structural development and by mutual agreement, Mr. Lalith De Silva tendered his resignation from Sri Lanka Telecom PLC as Group CEO effective from 13th March 2015. Mr. Dileepa Wijesundera assumed duties as the new Group CEO on the 9th March 2015. Mr. De Silva will assist the Company in its transition and will be handing over the duties to the new Group CEO during the period 9th to 13th March 2015.” 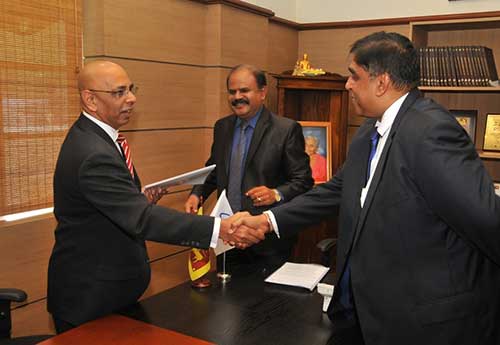 Mr. Dileepa Wijesundera is an engineer by profession and has been a top level executive with extensive experience in project logistics, profitability and restructuring both at private and government level. He obtained his BSc in civil engineering and also obtained an MSc in management from the Loughborough University (UK). He has successfully been at the helm of many prestigious corporate bodies including Head of Emirates Sky Cargo, Canada, Senior Vice President Qatar Airways, Chairman, Sri Lanka Ports Authority among others. This unique mix of talents elevates him to a very enviable position to take on the challenge of adding high value to the SLT Group and taking it to global standards through strategic focus, streamlining and innovation.

Commenting further Mr. Kumarasinghe said, “The outgoing Group CEO of SLT Mr. Lalith De Silva leaves after having diligently served the company. He has been instrumental in strengthening the Group’s strategic direction, initiating the CHANGE programme at SLT wherein attitudinal changes were brought about. The technological transformation of SLT by introducing the latest cutting edge technology for fixed and wireless broadband and wireless access was achieved under his guidance. He played a vital role in SLTs knowledge exchange programme and unveiled the i-Sri Lanka project for metro and rural areas. The National Backbone Network that is now being laid throughout the country has been one of his great initiatives. He also contributed in measure to the success of the SEA-ME-WE 5 submarine network initiation and the FTTH, LTE, Wi-Fi and Cloud Computing technologies being introduced to Sri Lanka and has worked tirelessly towards SLT attaining the position of pre-eminence it occupies in the telecommunication sector today.”